In the Italian town of Sulmona, in the Piazza Garibaldi, an amazing and elaborate centuries-old tradition occurs for the celebration of Christ’s Ressurection on Easter. This tradition is almost like a play that is performed, but instead of actors, statues of the saints are held aloft.

The tradition recalls the events of the resurrection, with statues of Saints Peter and John, Mary, and Christ. It reaches its culmination when the statue of Our Lady “sees” the resurrected Christ, her black cloak of mourning is torn away, releasing 12 doves, and those holding her begin a palpably joyful dash, representing a mother seeing her Beloved Son alive again. An in-depth description of the ceremony is found here:

Gathered in the square are many members of the Confraternity of St. Mary of Loreto, dressed in a white surplice and cordon with a green cape, carrying statues.

At 11.30 am, two statues of St. Peter and St. John are carried into the Square, being the two Apostles who were the first to see the empty tomb. The Statues move toward St. Philip Church: under the three arches we can see the Statue of the Resurrected Christ, which is set on a red baldachin.

Meanwhile, the two Saints knock on the Church main door to announce the Resurrection to the Virgin, and She, still dressed in black clothes, comes out incredulous after three announcements. Out of the door She moves toward the place marked by the Apostles who follow Her. Opposite the Fountain, the Virgin Mary sees Christ, She leaves her black clothes, unveiling a shining green dress and a red rose, while 12 doves start flying in the air. At noon, the Virgin Mary begins its run, to the applause of the people, the notes of the band and the firing of “mortaretti” (small cardboard cylinders full of gunpowder). Arrived in front of the Christ, the brothers embrace themselves, coming often to not hold back the tears with emotion.

If the whole sequence takes place without hindrance (running, drop the coat and scarf, flying doves), the tradition states that the year will be favorable, and if something does not work as expected, always referring to the same popular tradition, there will be calamities or natural disasters. The concern becomes greater if the statue should fall during the race or, even worse, if it ruined itself. We remember in the past the falls of the years 1914 and 1940, according to some, predictions of future wars.

After the race the Virgin is carried in the nearby church of St. Clare (now deconsecrated), to fix the cloack and hair if they were messy during the run, but also to replace part of the armature which constitutes the canopy on which the statue rests.

Roughly until 1809, when the church and the convent were inhabited by Clarisse nuns, the brethren carried the Virgin in this church, so the Clarisse nuns (not being able to leave the monastery) could greet her, but after the Napoleonic suppressions, the monastery was abandoned.

After the restoration of the robes, the procession begins, which is joined by the Trinitarians who take turns with Lauretani, carrying statues. At the start of the procession, accompanied by the band, there is the banner of the brotherhood of Lauretani, after there are the brethren with lanterns, statues of the Apostles, the dead Christ and the Virgin followed by the faithful.

This Centuries-Old Tradition of Running With A Statue...

In the Italian town of Sulmona, in the Piazza Garibaldi, an amazing and elaborate centuries-old trad...

In northern Italy, the death and Resurrection of Christ is celebrated symbolically at Easter mass, ... 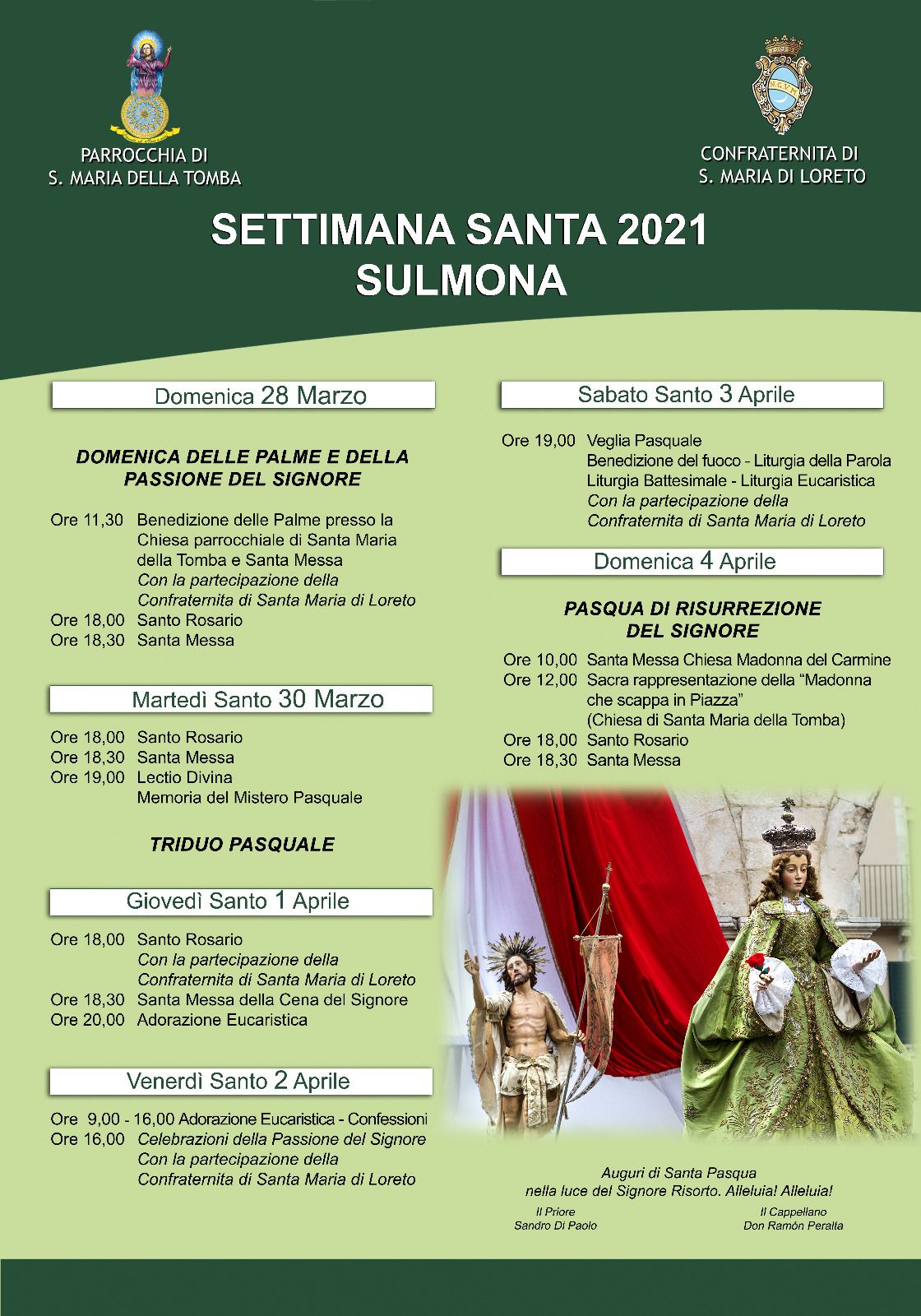